Some of the gang, pre-feast.

Saturday morning, we met some nurses (Jill & Natalie’s colleagues) then headed west of Bangkok, to a beautiful area known for its Mangrove fields. With its Thai Swiss-Family-Robinson wood structures over the water, the place was very “zen” and is a popular destination for groups and business retreats. Shortly after arrival, we boarded a long boat which took us all the way out to a platform way out in the ocean, completely surrounded by water. On the way, we saw cranes, monkeys, various lizards, and the fish that have two arms that allow them to walk on land! Crazy cool.

We climbed the wooden ladder up to the platform, and helped our host to unpack our lunch. We feasted on fish, a strange grass-like vegetable covered in coconut milk, freshly steamed veggies (special for me – you shouldn’t have) and freshly caught shrimp and squid – we were handed plates as soon as they were done grilling them! It was a very traditional meal, which made it that much more delicious.

We headed back towards land, but made a stop to plant some more mangrove trees in the mud. The mud was super slippery and thick – it went up to the knees – so the planting was quite entertaining to watch. I, the gimp, abstained. The driver pulled out some bananas to feed the monkeys. Monkeys in pictures are cute, but in real life – the knowledge that you have food makes them a little scary and vicious!

Since the water was so shallow, the driver also stopped to let people get out, swim, and attempt to water ski on a thick wooden ski pulled by another long boat.  Then, we headed back to the original platform area for showers, iced Roselle tea, and coconut jellies provided by our host.

After some regrouping (and more tea), we departed for Chonburi and Sriracha! Some of the crew had to head back immediately to Bangkok, so we parted ways there. On to the tigers! 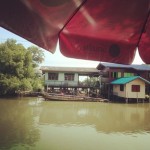 Hangin’ out, waiting for the other half of our posse.

View of our lunch destination from the boat.

A platform in the middle of the water, where we ate lunch.

Some of the gang, feasting.

The feast: seafood, strange local veggies, and a variety of “seafood sauces.” 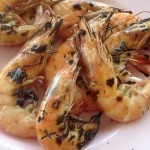 Crazy monkeys waiting for us to chuck bananas at them.

The statue in Lumpini park on our way to meet the nurses.

← Surgery in Bangkok
My King is a Baller →