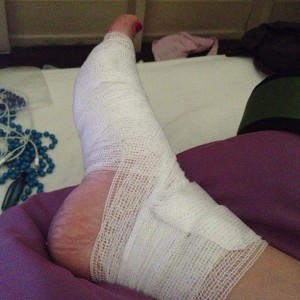 Initial wrapping. I somehow climbed the stairs to end up in my room. A later-realized bad decision, because going up… means going back down.

Three years ago, I had a foot problem which required the destruction of my foot, followed by a significant period of “gimp time”.

Although I thought that this operation had eradicated the problem, apparently I was wrong. The pain I had experienced before my initial diagnosis/surgery returned. Think “sequel villain” but way less cool and way more confusing. I talked to my doctor back at home (he was the doctor for the USA Olympic Track Team, no big deal) who gave me two options:

#1) Deal with the pain until I return to the US, then have surgery and recover at home.

#2) Have surgery now, deal with healing in a foreign place, then maybe get an examination when I return home.

After some consideration, I went with option #2. At the time of planning, I had over one month left in Bangkok (a relatively stagnant location compared to where I’ll be in coming weeks) and had an awesome family who would help me get around and recover post-surgery. I also really didn’t want to have to deal with the pain (sometimes it prevented me from walking) for the next three months when I’m supposed to be enjoying the rest of my trip around the world!

Decision made, I went to the Chulalongkorn Hospital (“Chula”)to get an examination and more advise from a doctor there. Let the games begin.

I went to the nurse station and explained my problem as clearly as I could, and she referred me to the 13th floor, the “insurance floor?” They scheduled me an appointment for 4:30pm that evening. Needless to say, I had time to kill. My friends Jill and Natalie work at Chula, so I went and visited them to decide the game plan for the day. I spoke with some of Jill’s nurse friends, who looked at my foot, and the paper that the first nurse gave me for my evening appointment.

She sent me to dermatology. For a problem inside my foot. Wrong answer, try again.

Equipped with my new motherly nurse pals, I got into the correct ward with an appropriate doctor/surgeon who took a look at my foot – and asked me probing questions (in English!). He also suggested excision as the best option, and scheduled me an appointment for two weeks from that date. (Communicating “not in Bangkok – in Krabi for next week” was difficult, but eventually successful.)

Side note: While hanging out in the foot/surgery ward, my roommate was a middle-aged Thai man chilling on a bed with about half of his heel missing. Completely gone, with an open wound. Super interesting to look at, kind of terrifying how nonchalant everyone was about it.

On October 29th, I showed up at my scheduled appointment time (8:00am), thinking I’d be seeing the first doctor I had talked to. Despite his indication that he would be my surgeon, he was nowhere to be found. Instead I found two nice, happy, minorly flustered nurses who didn’t seem to know where my doctor – whoever he was to be – had gone. Cool.

They had me put on a gaudy green bedgown, which actually covered up more of my leg than the outfit I was originally wearing. Awesome.

I then waited for another two hours for Dr. Mysterious, denying Jill any and all picture-taking opportunities.

Alas! Dr. Mysterious in the house! An older doctor finally appeared, took his sweet time to change, then came over to me to ask questions I had already answered, while continuously poking my foot in seemingly strategic pain points. He then invited his nurse buddy over to observe a repeat-performance of me, squirming in pain. After that torture ended, he decided that I should see an orthopedic surgeon! Genius? I think so.

Dr. Pawin came over to direct pain-squirming part three, producing some tears – I’m not sure if it was from pain or from holding back my urge to punch them both in the face. He undoubtedly felt the bump in my foot, and asked me if I wanted to remove it. I’m not sure if there was supposed to be a correct answer to that question, but I said “yes.”

Awesome bedside manner commenced. I was pointed to the operation room, where I got on the Thai-sized bed (read: plank) and waited for the team to assemble. They proceeded to inject my foot too many times with local anesthesia, which was probably the most pain I’ve experienced in years. Happy days!

Slicing and dicing occurred, and I felt everything. There was no pain (thanks to the fabulous pre-op pain), but I could sense the various stages of my surgery. Although I was clearly fine with the aspect of someone cutting the bottom of my foot open, they wouldn’t let me watch. Instead they covered my eyes with a blanket. Because eliminating one of my senses will help distract me. Oh wait.

If the operation itself was the time of my life, post-op was a dream. Once the surgeon finished stitching me up, I was instructed to go back to the waiting room. By myself. No crutches, just hobbling alone through the weird corridor towards my morning hang-out. I then dealt with the paperwork with my nurse bffs, which included hobbling between floors and departments to pay, get my meds, and schedule a follow-up appointment, where I’d also receive the results of the biopsy. Cus they didn’t know what it was!

Since Chula is a government hospital, surgery only cost me about 400B ($13) – this also might explain the “customer service.” Meds were basically Tylenol (I was dissapointed to discover), and were therefore also really cheap.

Sensing the clock ticking before my anesthesia wore off, I did those things as quickly as possible, then hobbled out the front door with Jill to get myself a cab home.

The next week consisted of me hopping around, avoiding stairs and unnecessary movement of any kind. My beloved host family brought me food, and I now know way too much about things like True Blood and how often Mae Yai watches TV. Recovery is still a work-in-progress, but I’m back at my job as the comedic-relief-foreigner, catching rides to the office with the neighborhood motorcycle taxi driver (sometimes we get coffee together, it’s super cute).

I’m still planning on taking some weekend trips, with slight alterations to accomodate my incessant limping. One such trip included a trip to the Tiger Zoo last weekend, which I’ll post about soon, and a future trip to Cambodia (Angkor Wat holla). Here’s to hoping all is well before I leave Bangkok! Sydney might not be so forgiving.