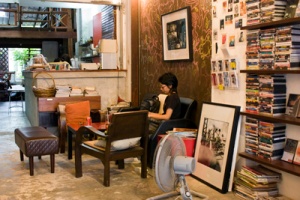 Upon arrival at the pier in Phuket, we had to take a van (“minibus”) into town. We managed to buy a ticket on the ferry which saved us around 100B. En route I realized that I could understand the people sitting behind us in the van – a rare occurrence in Thailand – because they were speaking Spanish! (I speak Spanish, but I live in Bangkok. Irony noted.) I overheard them talking about where they should go, that they didn’t know exactly where we were headed, and if they should ask the girls in front of them (Jill and I).

I turned around and said something like “It’s difficult – there aren’t many people in Thailand who speak Spanish.” Haha

They were a little thrown off, but were relieved to have help. Jill and I showed them our guide book so they could see where hostels were located. They settled on Old Town, where we were headed. It was a strange moment – speaking Thai to the driver, English to Jill, and Spanish to our acquaintances. We managed to get to the right place, showed them the hostel, and wished eachother farewell.

Jill and I then wandered around Old Town, looking for a place we had read about called Bookhemian. Jill and I are always on the hunt for a solid cup of coffee and some character – and this place was worth the rain-drenched hunt. The place was a cafe/library/film screening room/local art shop. It was very charming and they had made-to-order ginger tea (my favorite tea by far in Thailand). We sat out front, did some quality people watching, and took turns perusing the shop.

Before getting a cab to the airport, Jill and I also tried to find some vegetarian food. The Vegetarian Festival took place all over Thailand, but Phuket is particularly famous for its celebration. There were yellow flags (used to designate vegetarian food/restaurants) all over the city. We found a small place, grabbed a tofu snack (with chili sauce), and bargained with a taxi driver for a price to the airport.

Something I found completely ridiculous about Phuket: metered taxis are nowhere to be found. Apparently they exist, but I’d say that’s basically an urban myth at this point, and you’d have to be in the perfect place at the perfect time to score one. Several taxis wanted to charge us 500B for a trip to the airport. We tried to have a hotel concierge call a metered cab for us, but they didn’t have the number? What?

We bargained down to 350B I believe. Very expensive for Thailand, but in the grand scheme of things isn’t a huge price.

The airport was small and fairly empty. We got there very early, since we didn’t know exactly how long it would take to get there. Jill and I grabbed some food and did what we do best – turn random places into our home. We found a couple chairs and a couch near the cafe where I bought a sandwich for dinner, and claimed them as our own. Sprawled out in our makeshift living room, we easy passed the time until our flight, eventually running into the other girls who had a slightly later flight.

It was a short flight, and we were glad to be home at last after a busy day of travel. Of all the places I’ve been so far, I’d highly recommend the islands – especially Rai Ley. Phuket was interesting, but I honestly wasn’t there long enough to make a sound judgement of the city as a whole.