Drinkin’ With the Ticos

Our Liberia AirBNB host, Andrés, was unavailable to meet us at the apartment, and instead left a key with the rental service and asked us to call him. One friendly but awkward phone call later (he speaks only in very cheerful/enthusiastic questions) we had a vague sense of where the place was and the “game plan” for the evening and next morning.

I can say only one thing about our lodging in Liberia, and it is this: it was basic but sufficient, we got what we paid for, and we paid $20. Total (a few pics below).

Once we got into the apartment, figured out Wi-Fi, etc., we were able to Facebook chat with Andrés (his preferred form of communication, though containing significantly less question marks than verbal exchange) to get the lowdown on dinner and potential plans for the next day. Night on the town, commence!

Andrés recommended a nearby bar/restaurant called Victory – “the best kitchen in town”. His directions were spot on, and we were happy to be able to walk somewhere after so many hours on our butts in a variety of forms of transit.

Victory felt like a typical dive bar in Minnesota or Wisconsin, with a few notable quirks:

I served as a translator for both befriending our neighbor and ordering one Chiliguaro (famous local shot) plus a few dishes that Andrés recommended: Relleno de Chile (A giant stuffed pepper wrapped in scrambled eggs), Chifrijo con Carne (a combo of beans, rice, salsa Lizano and meat with tortilla chips) and Ceviche Pescado (sold out). He was right – everything was AMAZING – especially the Relleno de Chile.

Full to the brim, slightly less dehydrated, and happy, we headed home for the night and prepped for the next day’s adventure. Andrés invited us to come canyoning the next afternoon, but we chose instead to head for Monteverde for less heat, less traffic, and a little more relaxation. 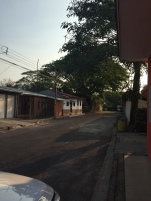 View of the ‘hood. 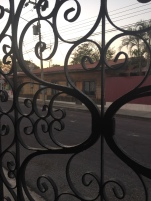 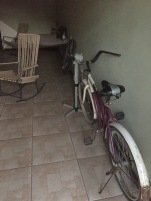 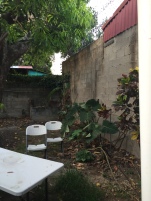 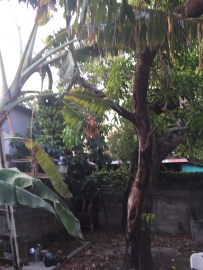 Sleeping arrangements! The fan was a necessity.

Out front the next morning.

← Landing in Liberia
Pineapple and Painted Chickens: the Road to Monteverde →