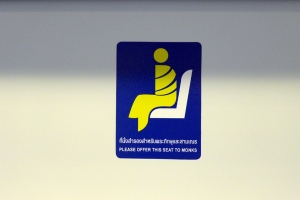 One fantastic way to avoid traffic in Bangkok is to take the Sky Train!

This is a separate BTS line that goes to the airport. There are two trains – one that goes directly to the airport (red line), and one that stops in the city along the way (blue line). They’re both much easier, cheaper, and faster than taking a cab, and run until 12:00am (midnight). Keep this in mind when flying in/out of Bangkok – it’ll save you a headache or six.

The Airport Rail Link can also serve as a great traffic-bypass when you’re coming into the city. When I took a mini-bus from the Thai-Cambodia border, I got dropped off at the airport and took the BTS into town (probably saving about 2 hours in traffic time). I connected to the MRT (underground) from the BTS, got off at the Bang Sue station, and took a bus home.

Although food/drink isn’t really allowed on the BTS, there are a ton of food/drink stands to check out once you get off. My personal fave? Mr. Shake Bubble Tea! Aw yea.

← What the Filipino: Pinoy food
Your 12-Step Guide to crossing the Thai/Cambodia border →